Billy knows a thing or two about what makes a killer guitar. Well he would, wouldn’t he? After growing up and learning his licks from the classic rock of the ‘70s, the San Francisco native ended up right there in the middle of the 1980s rock explosion that first lit up Hollywood’s Sunset Strip, then blew out the entire world’s speakers. Billy played rhythm and slide guitar in Jetboy, one of the pioneer acts of the incredible scene that spawned Guns N’Roses and Poison. Jetboy were tight with all of them, and were equal darlings of the Hollywood scene. But there always has to be a hard luck tale in any rock’n’roll saga – and Jetboy was it.

Bad timing and plain bad luck meant that despite major label albums, Jetboy never scaled the heights of their peers. But stadium rock’s loss is the guitar player’s gain. After decades as a touring musician and tech, Billy Rowe had shredded guitars and rebuilt them over and over. Recognizing that he had plenty to offer the world of guitar making, Billy launched Rock N Roll Relics in 2005, driven by a passion to hand-build nothing less than all-round amazing guitars. Starting with his usual hands-on, DIY mentality, Billy started out in a garage. With a basic website and a little black book of contacts, he started to network his way through an underground market of boutique guitars, amps, pedals and pick ups that he already knew well because of his own guitar obsession. Billy’s particular guitar fetish leaned towards what became known as ‘relic’ – the look and feel of guitars that have been worn-in and even a little bit beat-up by years of hard work on the road.

So Billy began building guitars with that cool vintage look, but guitars that were also defined by great craftsmanship and the finest materials.Things have gone well for Billy and Rock N Roll Relics. He has a really fun time making guitars that look, feel and play just the way you’d want them to. But Billy would say that, wouldn’t he? Luckily, he can also point to a long list of top guitar players who own one of his Rock N Roll Relics creations. Glen Campbell, Gilby Clarke (Guns N Roses/Kings Of Chaos), Bruce Kulick (Kiss/Grand Funk Railroad), Rick Nielsen (Cheap Trick), Bob Rock (Metallica and The Cult Producer), Derek St. Holmes (Ted Nugent) and Billie Joe Armstrong (Green Day) are all very satisfied customers. Why wouldn’t they be? All Rock N Roll relics guitars are built from the ground up, and get the detailed attention that any great guitar deserves from start to finish. All you’ll need to do when you get your hands on your amazing Rock N Roll Relics guitar is start making music – and hit that road! 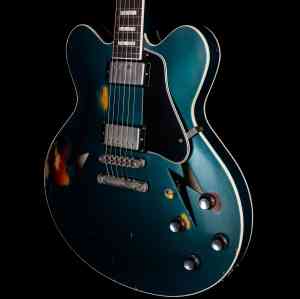 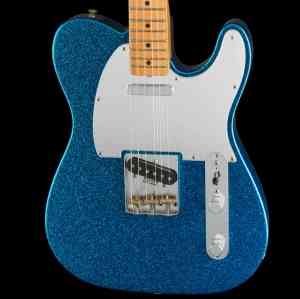 Fender J Mascis Telecaster Maple Fingerboard Bottle Rocket Blue Sparkle
Get this item for as low as $283.82 / month
based on a purchase price of $3229 at 10% APR for 12 months.
How Financing Works